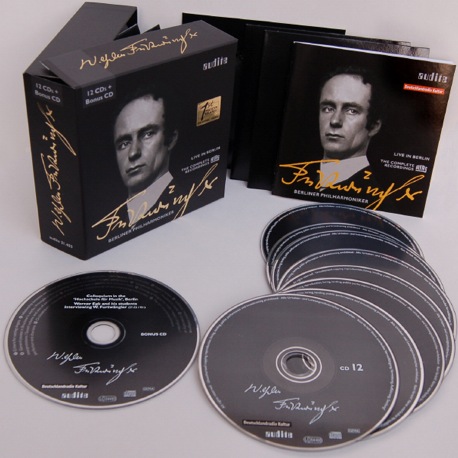 RIAS: Radio in the American sector in Berlin [after the war]

Starting in 1947, RIAS broadcast Furtwangler and the Berlin Philharmonic performing a variety of works until 1954. There were tapes made of these broadcasts, and Audite has made an arrangement to issue all of the available recordings, taken from the original tapes. This was released in 2009, and is by far the best sounding set of performances from Furtwangler from that era. Of course sound quality is relative, and these are mono recordings, and if you are only happy with the latest digital surround disks, you should move on. However, all of the recordings go from decent to good, and the performances are downright stellar. Furtwanglers takes on these works are from another era, and a few are not wonderful, but overall this is something that you will not hear from any recording these days. There is Beethoven, Brahms, Bruckner, Schumann, some Bach and Handel, plus a few works that you may never even heard of from composers that are no longer in the Top 20 anymore.

The majority of the concerts given by Wilhelm Furtwngler and the Berlin Philharmonic between 1947 and 1954 were recorded by the RIAS Berlin; all of these recordings are documented in this boxed set. The original tapes from the RIAS archives have been made available for the first time for this edition so these CDs also offer unsurpassed technical quality. Furthermore, some of the recordings are presented for the very first time, such as the Fortner Violin Concerto with Gerhard Taschner.

These RIAS recordings are documents of historical value: they contain a major part of Furtwnglers late oeuvre as a conductor, which was characterised by a high level of focus in different respects. Focus on repertoire which has at its core the symphonic works of Beethoven, Brahms and Bruckner and is supplemented by works by Bach and Handel and also by topical composers of the time, including Hindemith, Blacher and Fortner: artists who were counted amongst the members of moderate modernism and who were not perceived to have been tainted by the cultural politics of the National Socialists.

Focus was also a guiding principle in Furtwnglers concert programmes which always feature a particular idea. His interpretations also demonstrate extremely high levels of focus: concentration and focus for him meant a contem- porary decoding, a re-creation, which would express the fundamental content of a work. A number of works the Third, Fifth and Sixth Symphonies by Ludwig van Beethoven as well as Johannes Brahms Third Symphony are included in two interpretations. They reveal how Furtwngler was able to accentuate dif- ferent aspects of a work whilst maintaining the same, clear basic conception and how the actual interpretation depended on the context of the particular programme.

I have been enjoying this set for a while, and have heard some familiar works in a whole new way because of this release. The set is a steal at around $50 for 12 CDs of music, and iTunes has the download for half that amount. If you go that way, there is a booklet included in the download apparently, but you can also get a lot of info from the Audite website at www.audite.de.

I cannot recommend this set highly enough, both for the novice and more experienced music listener.