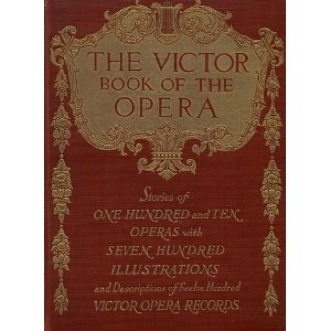 Sometimes I am amazed at the history you can find online. If you are a fan of opera, especially old recordings from the masters early in the 20th Century, you need to check out the Victrola Book of the Opera. This catalog was put out by the Victor [RCA] company in the 1970s, but it started at the turn of the century, when recordings first became common. There is a 1917 edition of the book at Google Books, and you can view and download a PDF for free. It includes a synposis of over 100 operas. Do be aware that this a Google Books scan, and when they photographed each page, they could not be bothered to even attempt to keep anything lined up straight, so the pages do shift around a bit at different angles. [Rant: Very common with the GB scans, and they really should be ashamed of themselves.]

Published in 13 editions between 1912 and 1976, the Victrola (or Victor) Book of the Opera was an ingenious strategy to promote sales of Victor label discs of opera excerpts. For 75 cents, record buyers could learn the plots and production histories of the most popular operas of the day, enjoy illustrations of favorite singers in costumes, and most importantly, have in hand a list of Victor records, with catalog numbers, of excerpts from each opera. Early editions of the Book of the Opera were compiled by Samuel Holland Rous, the editor of Victor sales catalogs. Rous began his career with the company as a tenor vocalist on many early recordings, billed as S. H. Dudley.

Now for an even better part: The Library of Congress has an Interactive Version of the same book. Along with the book itself there are also links to the actual recordings that are advertised in the book. The links are highlighted [you have to select the Audio button on the right to show them] and you are taken to the page at the LOC Jukebox, where they have 1,000s of old recordings archived.

The Victrola Book of the Opera at Google Books.

The Library of Congress Interactive Victrola Book of the Opera.

If you want a paper version of the book, Amazon has various editions here: Victor Book Of The Opera at Amazon.com 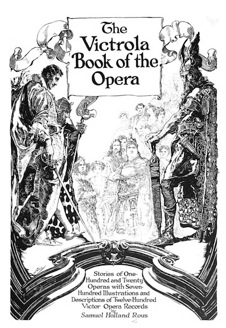