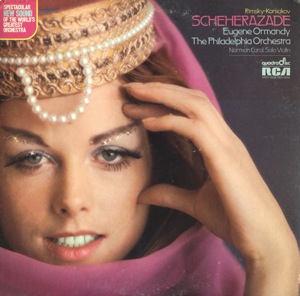 Every once in a while I go to the local thrift stores, and come across some great vinyl finds. I have always collected vinyl, even when I changed to all CDs for my classical music. Lately I have gotten back into listening to my records, and there are still some great LPs that are either not on CD or are in a budget release that has next to nothing as far as info or liner notes, which I really enjoy reading on the old LP sleeves.

I knew that Ormandy and the Phil Orch had recorded Rimsky-Korsakovs Scheherezade for CBS, but not for RCA. When they made the move over to the RCA label for a while, Ormandy & Co. re-recorded a lot of their more popular works. RCA was also experimenting with Quad recordings among other things, and I guess that the technology had improved enough to warrant a new recording of the works that the orchestra had recorded in the 50s and 60s again.

Turns out that a lot of those new recordings were superior to the CBS versions, although many of them have seemed to vanish from the catalog, hence why I had missed this particular one, and it is well worth having. Great sound, and maybe it is the Quad sound processing that was done for the LP, but you really hear a lot of the orchestra instruments better than any other version I have heard.

As far as it ever being re-released, I have a feeling it may be doubtful. What was RCA and CBS are now owned by Sony, and with so many competing recordings of the same work/orchestra, I have a feeling that these 70’s recordings may be lost in the shuffle. However I have seen some bargain sets come out lately, so maybe a good Ormandy RCA-era set will make it out.

It is not in print anywhere, but here is a link to the vinyl on Amazon:

The CBS version is available on the release below: 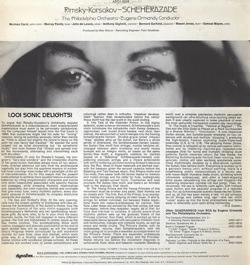