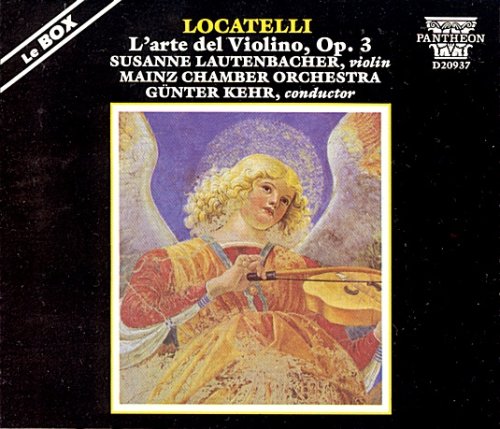 Locatelli’s Art Of Violin may not be a familiar Basic Repertoire piece, but is a nice work to own. Made up of 12 concertos, similar to Bach’s Brandenburg Concertos, these charming pieces are a study in virtuoso violin music. The works are contemporary with the Brandenburgs, being published about a decade later. Recordings of L’Arte are not too plentiful, although some of the concertos do show up from time to time on baroque violin collections.

Each of the twelve concertos in L’arte del violino contain the traditional three movements, with the typical progression of two faster movements surrounding a slower, more contemplative middle movement. In each concerto, the two outer movements contain what is known as a capriccio. These capricci, often lasting several minutes, can be described as a kind of written-out violin cadenza played extemporaneously during which the soloist is given ample opportunity to display his or her skill with the instrument. The capricci intervals contradict the expected format of the solo concerto by occurring before the final ritornello of the tutti. It is these 24 extraordinary capricci intervals for which L’arte del violino attained its fame, for they are described as “the most difficult violin display passages of all Baroque literature.”

The recommended version is a set by Susanne Lautenbacher with Mainz Chamber Orchestra and Gunter Kehr. The recording is from the 1950’s, and there is a little bit of tape dropout at the beginning of the first track on the first CD of volume 1 [at least in my 4 disc set, may be better in newer reissues], but after that, the sound is fine. Of course this is a ‘romantic’ reading, and not like ‘authentic’ baroque recordings of today, but the performance works. This set has been released in several versions [my version is pictured above] and are out of print, but there are several sets still available used at Amazon if you want to get these recordings. They have various labels and covers, and some split into two volumes. The link below will take you to the search results at Amazon for the recordings.

For an in-print recording, Wallfisch on the Hyperion label is the best one to get. This is a more ‘authentic’ baroque performance, and a very enjoyable listen.