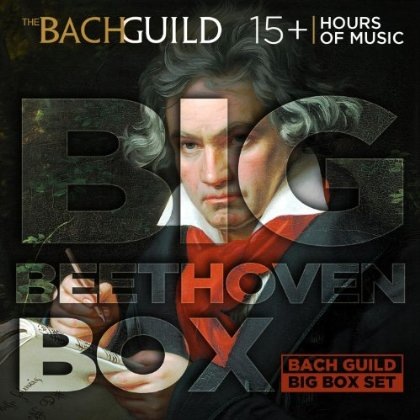 The Bach Guild [aka Vanguard Classics] has released their latest super bargain MP3 set, the “Big Beethoven Box”. There are symphonies, cello sonatas, piano sonatas, some string quartets, and other miscellaneous goodies. And all for the bargain price of 99 cents. As usual this set will most likely creep up in price to $9.99 eventually, but even then it is a bargain. The performers are good, such as Maurice Abravanel & Utah Symphony Orchestra. Some of the tracks have questionable sound quality, and apparently a few of the tracks are mislabeled. But hey, for a buck, who can complain?

These sets always seem to have some technical issues [quality control at the Bach Guild is spotty at best] but they usually get things straightened out fairly well eventually. This set has been up for a little while, so hopefully any big issues have been addressed.

So go get your 15 hours of Beethoven for a buck. Worth every penny 🙂 Side note, the other ‘Big Box’ sets that show up in the recommended other albums area at Amazon are well worth checking out too.